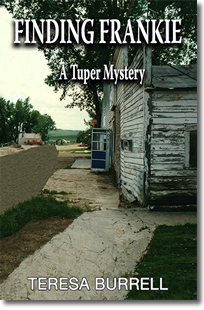 A hit-and-run driver leaves Tuper’s best friend for dead. But why? And how did Squirrely, a homeless man, acquire a duffle bag stuffed with thousands in cash, a pistol, and a 25-year-old newspaper?

As Squirrely lies in a coma, Tuper’s techie sidekick, Lana, uncovers fifty-year-old secrets about his connection to the death of a high school classmate. The cold case pops to the front burner when a second classmate dies in the same manner.

A Senator, his barren wife, and a long-ago illegal adoption heat up the complications. As Tuper and Lana dig deeper, lies, fraud, and blackmail bubble to the surface. When they get too close, the killer panics and tries to take them out too.

The case reaches a boiling point—just as Tuper unties a fifty-year-old twist and the cold truth finally puts the fire out.

Tuper leaned against the bar in Nickels Gaming Parlour. He took a drink from his bottle of orange soda pop and set it down on the counter. The sound of screeching tires, followed by a thud and a deafening clang of metal on metal interrupted the quiet. He moved quickly for a man in his early seventies, his cowboy boots clicking on the wood floor as he strode across the room and hurried outside. Clarice, the bartender, an attractive woman in her mid-fifties ran out behind him. By the time they were outside, the vehicle had left the lot and turned the corner. They only caught a glimpse of taillight as it drove out of sight.

Tuper and Clarice ran to the body sprawled across the wet pavement. Tuper glanced around and clutched the gun in his holster. Behind them, patrons, ignoring the spring rain, poured out of Nickels to see what was going on. As one man ran past the body toward a silver Camry parked twenty feet away, he shouted, “My car!” The vehicle had been clipped as the hit-and-run driver left the lot, leaving a broken headlight and severe dents to the driver’s side.

“Oh no,” Tuper said, as he approached the man on the ground. “It’s Squirrely.”

Clarice pulled her cell phone out of her pocket and called 9-1-1. “This is the bartender from Nickels Gaming Parlour on Last Chance Gulch. We need an ambulance. There’s been a hit-and-run in the parking lot.”

Tuper squatted his tall, lean body down beside the man. “Squirrely,” he yelled. “Talk to me.” He leaned close to his face to see if he could feel his breath. He could not. Tuper shook his head, partly because of the odor that came from Squirrely’s mouth and unclean body that suddenly smelled like a wet dog. Tuper knew his friend hadn’t bathed in several weeks. Even when he did, Squirrely would put the same clothes back on without washing them. Tuper saw Squirrely’s lips move, as if he was trying to talk. Tuper leaned in again, holding his breath to avoid the smell. Squirrely murmured.

“Just hang on,” Tuper said, as he tried to decipher the words.

“What did he say?” Clarice asked.

“It sounded like, Give to Elba or Ella or Emma. I don’t know. That’s all I could make out.”

Clarice reached for Squirrely’s wrist to check his pulse, but it was bent all the way back. A bone protruded out of the side, and blood flowed at a fairly rapid pace. She leaned across him to check the other wrist, her hair sopping up blood. “He’s still breathing, but he’s in bad shape.”

As Tuper talked to Squirrely, his voice choked up and tears ran down his thin, rugged face. The drops followed the scar down the right side, from the corner of his eye to the bottom of his chin. Squirrely didn’t answer. Tuper kept talking until he heard the sirens. The Helena Fire Department arrived within minutes. The crew was no sooner out of the truck when the ambulance from Montana Medical Transport arrived and took over.

Tuper pushed off the wet pavement to get out of their way. He stood back against the wall of the casino, feeling the rain for the first time. He felt a little weak and leaned back to brace himself, but his cowboy hat hit the wall, and he dropped his head down just slightly. He was standing there in his plaid western shirt and jeans, his silver belt buckle covered in blood, and his gray mustache still wet with tears, when Clarice approached. Her prematurely silver hair was wet, and the tips were red with blood. She hadn’t noticed her bloody hair until she caught Tuper staring at her. She wiped it with her hand, only smearing the blood more.

“He’s still alive, Toop. They’ll get him to the hospital now.”

Tuper shook his head without saying a word.

“Why would anyone want to hurt Squirrely?” Clarice asked.

“I saw him last night. He was talking crazy, then he gave me his duffel bag. He said if anything happened to him to look inside.” Tuper shook his head. “He said, ‘Do what you can to make things right.’ Those were his exact words. I tried to get him to explain, but he wouldn’t.”

“Hopefully, they can find out who hit him,” Clarice said, nodding toward the cops.

“I gotta go.” Tuper started to walk away, past the small crowd of gawkers. A few had gone back inside or stood under the awning near the casino.

“The cops are going to want to talk to you. We were the first on the scene.”

“You talk to ’em. You know as much as I do. I’m going to see what’s in that duffel bag before I talk to them.”

“What should I tell them?”

“Tell ’em only what you saw. That’s all you really know.”

“Toop, don’t get yourself mixed up in something you can’t get out of.”

“I ain’t got stuck yet,” Tuper said. “Find out where they’re taking Squirrely and let me know. I want to be able to check on him.”