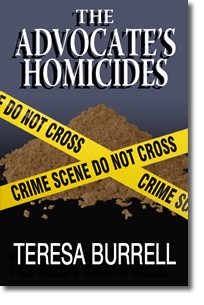 Attorney Sabre O. Brown is called upon to defend an abused fourteen-year-old boy of murder after a body is discovered in a shallow grave with the word GOOF scrawled across his forehead.

Years later when more bodies are unearthed baring the same GOOF signature, two more abused juveniles are accused of the gruesome slayings. In order to convince a jury of her client’s innocence, Sabre must either find a copycat killer; prove the murderer was a trusted friend of the three boys; or realize her worst fear—that her teenage clients carried out their own brand of vigilante justice to the men who abused them.

Homicide Detective Greg Nelson leaned over the dead body in the shallow grave and touched the arm with his gloved hand. The male corpse was greenish in color. “Looks like he’s been here awhile, at least a few days. Rigor has come and gone. I’d say he’s been dead about a week but definitely less than a month.”

“How do you know that?” Detective Smothers asked.

“His color points to about a week. He still has his hair, nails, and teeth, so I’m guessing less than a month. But it depends on how long he’s been buried here. He could’ve been preserved somewhere before he was buried. The coroner will be able to determine the time.”

Smothers wrinkled his nose. “He’s in pretty bad shape, and he sure doesn’t smell very good.”

“Is this your first body, Detective?”

“My first in the field. I’ve seen some in the morgue.”

Nelson wiggled his tie to loosen it. “Where’s the man who found him?”

“Over there.” Smothers pointed to an unshaven, scruffy-looking man standing near a tree with a boy who looked to be ten or eleven years old. They stood just beyond the yellow tape that had been tied to the trees encircling the grave.

Nelson glanced around at the cops walking the premises. “Has anyone found anything else?”

“Nothing earth shaking—a couple of animal bones and a lot of trash. The dogs are on their way.”

Nelson pulled his gloves off and walked over to the man and the young boy. “I’m Detective Greg Nelson.” Nelson reached out his hand and the man shook it but didn’t respond. “What are your names?”

“Sorry.” He exhaled. “I’m Jerry Bartlett and this is my son Joey.”

“Which one of you found the body?”

“We were together, but I saw it first,” Jerry said.

Joey looked terrified. “Perhaps I should talk to you alone,” Nelson said, nodding toward the boy.

Nelson signaled for an officer standing about ten feet away. She walked over to them. “Officer Barnes, will you please take young Joey here for a little walk outside the perimeter while I talk to his father. He’s had a rough morning.”

When they left, Nelson said, “Please tell me what happened.”

“My son and I were camping about a mile from here. We were hiking, as we often do, and Joey had to take a whizz. There was no one around, so he went right there.” He pointed to the gravesite. “And when he did, it washed away some of the dirt on the hand. I saw what looked like a finger sticking out of the ground.”

“There was more than a finger exposed when we got here. Did you dig around it?”

“I always carry a small hand shovel in my backpack. I kept thinking it was some kind of a joke and the hand would be plastic or rubber or something. I used the shovel to remove some of the dirt around it, but then I realized it was real so I stopped and called 9-1-1.”

Nelson collected Bartlett’s personal information and questioned him a while longer. They both watched as the canine unit drove up and Kruegster, a mahogany-colored malinois with a black face and black ears, jumped out of the car.

“What’s the dog for?” Bartlett asked.

“He’s trained to look for evidence.”

“Do you always use the dogs?”

“No, but it’s easier in this kind of setting because there’s so much ground to cover.”

Nelson asked him a few more questions about his camping trip, such as how often he went to Coyote Ridge and how long he had been there this time. Then he spoke briefly with his son, who corroborated the information.

Nelson was walking back towards the body when the K-9 officer yelled from about sixty feet away. “We have another one!”

“They just get better…” —Nancy

Teresa Burrell is on the right mountain and then got off the chair lift on the right slope..AGAIN!! I have been hooked on her “Advocate” series since book one and this last is A-MAY-ZING. —Marcia Woolard

It’s a real treat to find a legal mystery fiction that you can get into quickly and enjoy the unfolding plot without getting lost in a copious amount of lawyer jargon as happens to too many legal thrillers. Teresa Burrell, author of The Advocate’s Homicide, is a lawyer, but her focus isn’t on impressing readers with her knowledge: it’s on telling an absorbing story based on a too common and very sad social issue.