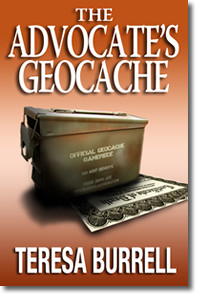 Attorney Sabre Brown is having a great time geocaching, the Internet’s version of a treasure hunt. The fun ceases when she “caches” a container with an official death certificate citing “Murder by Poison” as the cause of death. Even more disturbing is that the date of death is ten days in the future.

Sabre is forced to search cache after cache, each revealing more clues, until they take an unexpected twist and shockingly point to one of her court cases.

Is the murderer a rejected child, a well-known plastic surgeon, a scorned ex, a crooked lab technician, or a politician in line for the highest office in the land? Or is someone playing Sabre in an ugly geocache of life and death?

“I found it,” Attorney Sabre Brown called out with the excitement of a child. Sabre stood, looking up into a tree, about two miles off of I-15 near Escondido, California.

Sabre’s private investigator, JP, meandered toward her, less than enthused about the process. He passed a man in a baseball cap who was walking in his direction. “Hello,” JP said.

“Hello,” the man said without raising his head.

JP had yet to understand Sabre’s interest in geocaching, but agreed to accompany her this one time. He didn’t understand the fun in looking up GPS coordinates online and then chasing them down only to find some little container with a trinket in it. Maybe he would have enjoyed it when he was nine or ten years old, but he would be fifty soon. He’d rather be at the shooting range or home watching a football game, but Sabre loved geocaching. To her, it was a treasure hunt and a good distraction from her juvenile court practice. And last weekend, Sabre had sat through an entire afternoon of football with him in spite of her lack of interest in the sport. It seemed only fair that he put some effort into sharing her interests.

JP reached the spot where Sabre was standing. He couldn’t hold back a smile when he saw the look on Sabre’s face. He loved her passion about
everything she did in life. And she looked so beautiful. Her light brown hair lay in a French braid that stopped about six inches below the nape of her neck. It took all his self-control to keep from leaning down and kissing that gorgeous neck.

“Look, it’s right there.” She pointed up into a tree.

“Where? I don’t see it.” JP pushed his black cowboy hat back on his head as he looked up into the tree.

“Right there between those branches.” She pointed to a grayish-brown tube nearly the same color as the bark of the eucalyptus tree. It was crammed in a pocket where a branch extended out from the tree.

Before JP could find the exact spot where the treasure was planted, Sabre grabbed hold of a branch, swung her leg up and over it, boosted herself up, and stood on the branch. From there she could reach the cylinder.

“My brother, Ron, and his friends used to hide from me when we were kids. We had a huge oak tree in the backyard, where he built a fort. He didn’t makestairs for it because he thought if he didn’t, it would keep me out.”

“It did for a while, but then I learned to climb the tree and sneak up there when he wasn’t around and mess with his stuff.”

“You still hang in there like a hair in a biscuit.”

Sabre smiled at his remark, pried the treasure box loose, and sat down on the branch. Her legs swung slightly as she popped the plastic end off the cardboard cylinder. A rolled-up sheet of paper with blue trim was tucked inside of the tube. She attempted to remove it, but it caught on the edge. Sabre moistened her fingertip, reached inside, and twisted the paper around so it would tighten into a smaller roll. Then she pulled it out and unrolled it, but as she read the document her face drained of all color.

She peered down at JP with a curious look. “It’s a death certificate. That’s creepy.”

JP reached his arms up toward her. “Come down.”

Sabre leaned forward into his arms and JP lowered her. He could feel her slender body quiver as he planted her feet on the ground. He kept his arm around her as she looked again at the paper.

“It looks official and like an original, not a copy,” Sabre said.

“Why would someone put a death certificate in a geocache?” JP asked. “Is that normal?”

“No, this is really strange.”

JP saw the look of concern on Sabre’s face and said, “Maybe someone thought it would be a good way to honor their loved one. I find it pretty bizarre, but people do strange things when they’re grieving. What’s the name of the deceased?”

“It’s for a man named Monroe. There’s no last name, or maybe that’s the last name and there’s no first name.”

“It sounds like it’s someone’s idea of a sick joke—probably an April Fools’ Day joke. That was only a couple of days ago.” JP shrugged. “When did he die?”

Sabre glanced back at the document. She looked up. Her eyebrows furrowed. “He hasn’t yet. The date of death is April fourteenth, one week from today. And the cause of death is ‘Murder by Poison.’”

An excellent novel that was hard to put down.—David

Another great book in Teresa Burrell’s Advocate series. Human interest combined with crime and mystery, kept the pages turning. The book incorporates the hobby of geocaching which I knew nothing about but this has definitely piqued my interest. It isn’t until late in the book the relevancy as to how it relates to the crime. Sabre Brown is a child’s advocate attorney representing 5 siblings in a legal custody situation. Murder enters the scene along with a string of deadbeat dads, and a self-centered mom. Every time I thought I knew who dunnit, another corner was turned. It wasn’t until near the end that I had the slightest idea of the who, what, why. It’s a fun, easy read for anyone who likes a good mystery.—Vickie Barrier