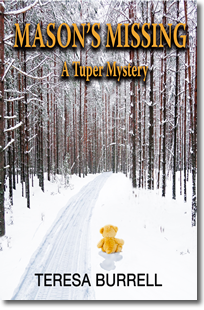 Tuper is helping find five-year-old Mason, who was presumedly taken by his father, but when Mason’s father is found unconscious, Mason has disappeared again. In an impossible search during a bitterly cold Montana blizzard, old cowboy Tuper and his hacker friend Lana’s quest blurs into one of insanity and murder. As wounded Tuper fights to stay alive in the bitter cold, Lana searches cyberspace and finds someone is working hard to ensure certain secrets remain secret–especially Mason’s true identity.

The last time five-year-old Mason Jenkins was seen was when he dashed out of his kindergarten class at the end of the school day. It was the first day of class following winter break. As usual, most parents had parked and come to the school door to meet their children, but a few stayed with their cars, lined up along the street, waiting for the kids to come to them.

Ms. Stiles, their teacher, had just experienced her first day of teaching. She had replaced a teacher who had taken ill, and she was overwhelmed by the sheer responsibility of it all. She tried to keep the children all together, but instead of leading them outside, she made the rookie mistake of going to the back of the line. Several of the children spread like puppies in a new park, all going in different directions. One of them was Mason, who made his way toward a dark blue Toyota RAV4. A man in his early forties stood near it.

“Mason, Jamie, Cindy,” Ms. Stiles yelled out to children who had broken out of line and run towards their parents’ cars.

Mason turned and waved to the teacher and continued toward the car. The man picking him up waved as well and then opened the car door for Mason to get in.

Ms. Stiles went back to tending to the other children, and Mason and the man drove away.

A tall, rugged man with a thin face and a gray mustache sat at the bar in Nickels Gaming Parlour in Helena, Montana. Only when he turned to the left could you see the scar that ran down the right side of his cheek, starting at the corner of his eye and ending just under his chin. He was wearing a very old cowboy hat, a disheveled plaid shirt, jeans, a big silver belt buckle, and cowboy boots. A bottle of orange soda pop sat on the bar in front of him.

After perusing the crowd, an attractive blonde woman in her late thirties, dressed in a simple blue dress and a light jacket, began walking toward him.

“How do you do it?” the bartender, a long-time acquaintance of Tuper’s, asked.

“How do you get all those beautiful women?” He nodded toward the blonde woman. “You gotta be more than twice that woman’s age.”

“I’m sure you’ll find out,” the bartender said, as the blonde strode up.

“Denise Jenkins,” she said, looking around the crowded bar. “Can we talk somewhere a little more private?”

Tuper looked at the bartender and raised one of the prominent eyebrows that sat over his deep-set eyes.

The bartender shook his head, paused, and then nodded toward the door off to his right. “You can use the office. And, Toop, no hanky panky.”

Tuper stood up and moved toward the closed door, opened it, and went inside. Denise followed him. The office contained a small computer desk with a padded chair, a loveseat, and an overstuffed armchair. The walls were bare except for one large, black-velvet picture of dogs playing poker and smoking cigars. Tuper sat in the overstuffed chair and nodded toward the loveseat for Denise. She sat down. Tuper didn’t speak; he waited for her to explain what she needed.

After a moment or two of awkward silence, she said, “A friend of a friend told me I might be able to find you here.”

Denise rubbed her hands together in a nervous gesture. “My son is missing and I need you to find him.”

“What do ya mean, missing?”

“He was abducted at school on Monday.”

“Have there been any requests for ransom?”

“Has anyone contacted you?”

“No. I think his father took him, but I can’t prove it. Randy swears he didn’t, but I don’t believe him.”

“I take it you’re not together.”

“No, we’ve been separated for a while. I just got full custody of Mason. It’s a temporary order, but I’ve been told that unless something drastic changes, it will become the permanent order. Randy was real angry about it.”

“Tell me what happened.”

“I dropped Mason off for his first day of school since before Christmas. He started kindergarten in September. Randy was supposed to pick him up, but he arrived about five minutes late. By then, Mason was already gone. The teacher told him that some man had picked him up in a dark blue RAV4. She guessed it to be about a 2000.”

“Have you been to the police?”

“Of course. That’s the first thing I did. They’re looking for him, and the Amber Alert is still in effect, but I know they think he’s dead by now. They said the first forty-eight hours were critical and it’s already been three days.”

“What do ya think I can do that the police can’t?”

“My friend says you’re the best, that if anyone can find him, you can.”

“I’ll pay you. I don’t have much, but I have a hundred dollars with me and a few hundred more in my checking account, and I’ll get more. Please. I’ll do whatever it takes to get what you need. I’ll steal it if I have to.”

Tuper brushed each side of his mustache with his thumb, two strokes on each side. He looked at Denise. After about ten seconds of silence, he said, “Got a picture of him?”

She took a deep breath and opened an envelope. She pulled half a dozen photos and handed the first one to Tuper. It depicted a young boy with curly, blond hair and hazel eyes. He was wearing khaki shorts, a blue knit shirt, and new sneakers and was holding a mint-green backpack. “This is Mason. The photo was taken Monday morning before he left for school. Those are the clothes he was wearing to school.”

She handed him a second one. “This is him a few months back.”

Tuper nodded again but said nothing.

With the third and fourth photos, she said, “That’s Randy, Mason’s father. He’s five-foot-eleven but claims to be six-foot. He has curly, light brown hair and eyes the same color as Mason’s. He wears a cap most of the time to cover his quickly receding hairline.” The photo showed a man standing next to a shiny tan car.

“Is that what he drives now?”

“We’re all jerks. Could you be more specific?”

“He gets real angry and mean. Always threatening me.”

“Threatening to hurt you?”

“Whenever he would get mad, he would threaten to take Mason away from me.”

“Just once. He got angry because I let Mason watch a Disney movie that gave him nightmares. His screams woke Randy up and he couldn’t get back to sleep so he started drinking. Then he woke me up and we got into a big fight.”

“Yes, for Big Johnson Tire. He’s been there about a year.”

“Ever been in trouble?”

“Not since he was a kid. He stole a car when he was a teenager, but it was more of a joy ride. He’s thirty-eight now.”

“I don’t know. He says he’s looking for Mason.”

“I think he ran off with him.”

“He was in Leisure Village Mobile Park on Herrin, but I don’t think he’s there now.”

“I know the place.” Tuper tried to remember which one of his past lady friends had lived there, but he couldn’t think of who it was. Perhaps when he went there it would ring a bell. “What space number?”

“Number 34 on Riviera Drive. It’s the street on the far left of the village.”

“I think he might be having an affair. But I don’t know for sure, just some things that I’ve noticed.”

“Any idea who with?”

“What else can you tell me about Mason?”

“I just need you to find him. I can’t live without my son.”

Denise opened her purse and removed five twenty-dollar bills from her wallet. She handed them to Tuper. “This is all I have on me. How much more do you need to start looking?”

“What kind of car are you driving?”

“I charge what folks can afford.” Tuper removed one twenty-dollar bill and handed the rest back to her. “I’m guessing that’s about what you can afford.”

“That can’t be enough money.”

CLICK HERE to download the first two chapters of Mason’s Missing
“As always, another awesome and incredibly riveting book!”
~Colleen

“Just when I thought I had the ending figured out Burrell throws in more information and a total twist that I never saw coming.”
~Dianne

“Hard to set aside at bed time.”
~Rodger

“Mason’s Missing is fantastic. I love all the twists and turns.”
~Beth

“I really love these characters; can’t wait to see how they develop in future books.”
~Nancy