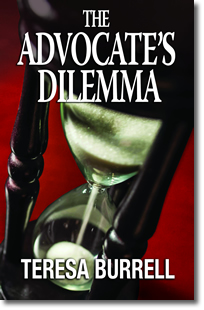 Attorney Sabre Brown’s day is going well until she walks into her office and finds a dead man sprawled across her desk. When Bob, her best friend and colleague, is suspected of the murder and Sabre’s minor client has information that might clear him, Sabre has a dilemma.

How does she help her best friend without betraying the confidence of the child she is sworn to protect?

Why is there a dead man in your office?” Bob asked.

Sabre spun around to face her friend.

Several police officers and detectives were checking for evidence. Sirens blared as more police cars arrived. An officer approached Bob and asked, “Who are you?”

Bob reached out to shake the officer’s hand but put it back down when he realized the policeman was looking elsewhere. “I’m Attorney Robert Clark, a friend of Ms. Brown’s.” He nodded his head toward Sabre. He looked around the room and then added, “And her attorney, if I need to be.”

“Please step back. Actually, I’d like both of you to wait in there.” He pointed to another office next to Sabre’s. “And please don’t disturb anything.”

Bob and Sabre entered David’s office. Sabre hadn’t been in there in a long time as David seldom came to work. He spent most of his time with his new ice cream business. Sabre walked her new Gucci heels and cobalt blue suit over to David’s window. Her brown hair hung just beyond her shoulder. Bob followed her to the window.

Sabre started practicing law when she was twenty-five, just over six years ago. Bob started a few years earlier. They both knew not to touch anything and were very careful. As they gazed out the window, they watched the cops block off the area outside of the building.

Bob put his arm around Sabre’s shoulder. “You okay?” he asked.

“It was a bit of a shock to find a body on my desk, but I’m all right. I’m just wondering how and why it’s there.”

A tall, thin detective with blond hair entered the office. Sabre had spoken earlier with another detective, but she had yet to meet this man. He appeared to be in his mid-thirties, around Bob’s age. His hair was just beginning to recede.

He reached out his hand to Sabre and then Bob. “I’m Detective Shane Klakken with the

“Sabre Brown. This is my office. Well, not this office; the office with the body is mine.”

“I’m Robert Clark. I’m a friend and colleague of Sabre’s.”

Sabre looked at the black powder on the beige chair and decided to remain standing with Bob and the detective.

Klakken looked at Sabre. “I understand you found the body.”

“I don’t know. I walked in and found him lying across my desk.”

The detective turned to Bob. “Where were you?”

The detective turned back to Sabre. “Come with me and show me exactly what you did.” He looked at Bob. “You wait here.”

Sabre walked out the door, the detective close behind her. Bob followed. Klakken frowned at Bob but didn’t say anything. Sabre walked past her office and into the small entranceway to the back door. The area also functioned as a copy room.

“I came in here through the back door.”

“Was the door locked?” the detective asked.

Sabre thought for a second. “Yes, I think so. Yes, it was. I had to put my key in the door and I…I turned the lock.”

“I walked into my office.”

Sabre walked past a large copy machine that had a sign on it that read, “TEMPORARILY IN ORDER,” past a small desk, and through the hallway until she reached her office. A policewoman was leaning over the body, examining him. The dead man was still sprawled across the desk, lying exactly as Sabre had seen him earlier. He appeared to have been standing behind her desk and had fallen forward. His face was turned away from them, his right arm hung partway off the far side of the desk, and his left elbow lay next to his body with his hand on a manila folder. He wore torn jeans and a dirty, black t-shirt. The only other things on the desk were a penholder, a desk lamp, and the key box, all of which set near the corner of the desk closest to the door. Sabre kept her desk very tidy. Two other men were in the room. One was dusting for prints; the other was looking through Sabre’s bookshelf.

“What looks different than the way you left it yesterday?” Detective Klakken asked.

Sabre pointed to her desk chair that was now about two feet from her desk. “My chair was pushed in behind my desk, not over there. That photo of my brother on the credenza was standing up. And there was no body on my….Oh no!”

“Ron’s hourglass is gone.” Sabre stepped forward and pointed to a spot on the desk near the man’s head. “There was a large hourglass sitting right there.”

Sabre fought back the tears. She had so few things left that belonged to her brother and couldn’t bear the thought of losing one more.

“It was an antique, mahogany, Victorian hourglass. Very solid and heavy, about ten inches tall,” Bob said, helping her out.

Klakken noted it on his pad and then walked over and told the man standing near the bookshelf. Bob put his arm around Sabre. She took a deep breath and composed herself. She looked at the man on the desk and muttered. “I guess there are worse things than losing a keepsake.”

Klakken returned. “Start from the top and tell me what you did and what you saw when you came into the room.”

Sabre took a deep breath and blew it out. “When I came in here, the first thing I saw was him lying on my desk. I dropped the files I was carrying because I was startled.”

The detective looked around at the floor. Two manila folders, each at least one inch thick, lay on the floor near the door. A number ten envelope lay just under the desk near the leg, and a single sheet from a yellow legal notepad lay close to the folders. “Is this all you had in your hands?” he asked.

“I dropped them in that little box on my desk. That’s where I always put them.”

“Where is your purse?”

“Your purse? What did you do with your purse?”

Bob spoke up. “Nope. She doesn’t carry a purse.”

The detective shook his head and mumbled. “I’ve never met a woman who doesn’t carry a purse.”

“Well, now you have. I have a briefcase that is with me most of the time. That’s in the trunk of my car. I don’t need another piece of luggage to drag around.”

“Okay,” the detective said, “so after you came in, you saw the body and dropped your files. Then you put your keys in the box?”

Bob spoke up again. “Does it really matter what she did with her keys?”

“I’m just trying to get a clear picture of exactly what happened and what may or may not have been disturbed.”

“It’s okay, Bob.” Sabre said. “I remember yelling, ‘Hello,’ but he didn’t say anything. I said something else like, ‘What are you doing here?’ Still nothing. I pulled my phone out of my pocket.”

“With which hand?” the detective asked.

“With my left. My keys were still in my right hand. He didn’t move. That’s when I reached over to try to awaken him.”

“You didn’t know he was dead yet?”

“He looked dead, but I thought he might be drunk.”

“What did you do before the police came?”

“I stepped out of the room and I called Bob.”

“Do you know the dead man?” the detective asked.

“No, I don’t think so,” Sabre said. “I walked around the desk and looked at him, but I didn’t stand there studying his face. I’m pretty sure he’s not anyone I know. At least I didn’t recognize him.”         “Well, let’s take another look.” He led her around the side of the desk. Bob followed.

Sabre shook her head. “No. I’ve never seen him before.”

Bob ran his hand through his prematurely gray hair and said, “I recognize him.” He looked up at Sabre and Klakken. “He’s the husband of one of my clients.”

Just finished your book, loved it!   And now I’m hooked, and happy you’ve written more.  Going to amazon.com now. Thanks for the Five Star suspense, you had me on the edge of my seat the whole time. Looking forward to reading all your novels.–Robin W

I just wanted to say thank you for writing clean great thrilling fiction! I love Sabre and all she stands for! I love that she has a clean mouth and decent morals. I love the thrill in your stories and justice for wrong. I’m a single mother and third grade teacher. Reading is my get away from the world I have fallen in love with these books! Thank you thank you!–Amy

Loved the book.  Characters felt like they were right next to me.  Could feel the emotions. –Iris

The Advocate’s Dilemma–Most outstanding!!! You’ve hit another home run! Great ending. Thank you for another great story.  Did not see the whole ending until you put it all together.  I’m impressed again.–Your fan, Ted