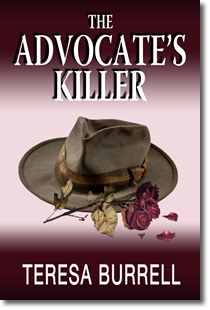 Attorney Sabre O. Brown receives a text with an image of a dead man sprawled on the ground beneath a three-story building. He was a social worker Sabre recently opposed in juvenile court. Did he fall, or was he pushed? As she and JP, her private investigator, search court cases for the suspected killer, the texts become more frightening and personal. Soon packages with dire warnings threaten Sabre and her loved ones. Their frantic search uncovers disturbing revelations, putting Sabre in the crosshairs of a clock-ticking threat. With her life on the line, will she discover the stalker in time—or become a victim of the Advocate’s Killer?

Please leave a note on Paypal with instructions on who you want the book or books signed to. If there are no instructions, the book will just be signed and dated, not personalized. If you have any questions, please email me at teresa@teresaburrell.com.

Attorney Sabre Brown stopped outside Courtroom One and opened the text she’d just received. An image of a bloody body made her gasp. A man lay on the sidewalk, battered and broken.

“What is it?” asked Bob Clark, her best friend and colleague.

Sabre handed him her phone.

Bob studied the photo. “We know this guy.”

“What?” Sabre leaned in to see the photo again.

Bob took a closer look. “He sure looks like that social worker…what’s his name?”

“I don’t know. All I saw was a lot of blood and a contorted body.”

Bob held the phone out for Sabre. “Look, isn’t he a social worker? You know—your friend from that trial you just had. Dickolson?”

Sabre glanced at the image again. “You’re right. That looks like Jim. And it’s Nicholson, not Dickolson.”

“Dickolson suits him better.” Bob moved his thick glasses down and looked again. “I can’t tell for certain, but I think that’s him. I never liked that guy.”

“Me either, but I didn’t want him dead.” Sabre shuddered.

“But he is the social worker on that nasty case you just had, right?”

“Yeah, the Baxter case. We did the trial last week. He wanted to send Hannah, my six-year-old client, home with her mother who was still living with her boyfriend, the guy who molested her. The mother told Nicholson the boyfriend was gone, but he never checked to see if she was telling the truth.”

“How did you know he was still living there?”

“I went to the house, knocked on the door, and he answered.”

“So, it didn’t take rocket science to learn that.” Bob shook his head. “That guy was the laziest person I’ve ever met.”

“I know the social workers are overwhelmed and their caseloads are too high, but no one else in the department would’ve made that kind of mistake.”

“Who sent you this?” Bob asked, handing back her phone.

Sabre walked over to the bench in the hallway and sat down. Her petite body hadn’t changed, but she suddenly felt older than her thirty years. As she leaned over to examine the text, her shoulder-length brown hair hung down in her face. “I don’t know. I don’t recognize the number.”

Bob followed but stayed on his feet.

“Why would someone send me this photo?” Sabre asked, shaken by the idea. “And what if it really is Nicholson?”

“Is there any message?”

“Call the number and see what happens.” Bob started to pace.

Sabre hit the info button, then pressed the phone icon to call back. She shook her head. “I’m getting a busy signal.”

“Could be a burner phone. Maybe it was Richard Wagner or Mike Powers. Those guys have a strange sense of humor.”

Sabre looked up. “Maybe. Mike was on my trial. Perhaps he thought I should know. But I have Mike in my contacts. If he sent it, his name would show up. Besides, I doubt if he has a burner phone.”

“To yank your chain. Especially if it’s not really Nicholson. What if he saw the photo, thought it looked like the social worker, and decided to prank you?”

Sabre thought for a few seconds. “No, that’s a little much even for Mike.” She stood up. “I have another hearing in Department Four. Are you done?”

“Yes, but I’ll wait for you. In the meantime, I’ll see if Powers is here and ask him. Maybe see what I can find out about Nicholson’s living status.”

Bob walked with Sabre to Department Four. They passed a heavy-set, bleached-blonde woman standing near the information desk. She looked up from her iPad and glared as they walked by.

Startled, Sabre said, “Did you see the way that woman looked at us?”

“She’s my client. Lovely lady. I can’t wait for you to get to know her.” Bob chuckled.

“Yeah, I can tell from the report how lovely she is.” Sabre glanced back to get another look at her. “She seems familiar. Was she here last Thursday?”

“She did the same thing that day. She scowled at me when I passed her in the hallway.”

“She’s a peach. Her case has been here a few times. The last one was about two years ago. I’ll tell you about it later, pretty funny stuff. The case closed, but now it’s baaaack.” Bob stretched out the word in a creepy, songlike way.

They stopped at Department Four, and Sabre went inside.

Bob went to search for Mike Powers. He couldn’t shake the uneasy feeling about the text Sabre received. She was his best friend and had been for many years. They’d met in juvenile court when they were on a dicey case together—one they managed to win—and they had remained friends ever since. They lunched together nearly every workday at Pho Pasteur, a Vietnamese restaurant a few miles from court, where Bob always ordered the same thing.

“Hey, Mike,” Bob called to a man walking out the front door. “Wait up.”

Mike Powers stopped until Bob caught up to him, and they continued outside. Mike was ten years older, but Bob knew his prematurely gray hair made him look forty-something too.

“Did you hear anything about Jim Nicholson getting killed?”

“I have no idea.” Bob told him about the photo.

“Why would someone do that?”

“I don’t know. I was hoping it was you. I thought you might be goofing around.”

“Are you sure he’s dead? Maybe it was someone’s idea of a bad joke.”

“The guy sure looked dead, but I’m not even certain it was Nicholson. I’ll make a few calls and see what I can find out.”

“Good luck,” Powers said. “I need to run. I have to pick up my son from school. He got sick and threw up in the classroom.”

Bob walked back inside the courthouse and looked around. He spotted a social worker he knew and walked toward her. “Hi, Sally.”

“You too. Why are you in court today?”

“I have a new detention that’s a little sticky, an eleven-year-old who keeps running away. Are you on detentions this morning?”

“No, but I wish I was. I always enjoy having cases with you.” He paused. “Do you know a social worker named Jim Nicholson?”

Bob didn’t want to start a rumor, just in case the photo was fake. “You haven’t seen him this morning, have you?”

“No, in fact, our supervisor was upset because Jim missed a meeting this morning and didn’t call in.”

“Has he done that before?”

“Not that I’m aware of.” Sally scowled. “What do you know about Jim?”

“Nothing for sure yet,” Bob said and hurried off. He sat in front of Department Four until Sabre came out. He updated her on what Powers and Sally had said.

Sabre opened the text again and stared at the photo. “It sure seems real, and it looks an awful lot like Nicholson.” She handed the phone to Bob again.

“It does to me too, but you can do anything these days with Photoshop,” Bob said. “Are you okay?”

“I’m fine. It’s a little strange, but we’re used to dealing with kooks, right? I can’t let it bother me.”

They walked out the front door together. Just as they stepped outside, Sabre’s phone beeped. She scanned the text. “Now this is just getting too weird.”

Sabre read the message out loud. “I’m sure that pic made you happy. LHO.”

“Good book. I hate knowing this kind of stuff happens but I like the “getting it fixed” endings.”—Vickie

“Another great book! I love the series, and it seems that each book is better than the last.”—Colleen

“You’ve written a heck of a good story.”—Rodger

“Wowza, another good one. The dialogue between Sabre and Bob made me laugh, at one point I got really sad, and that ending was just fabulous.”—Denise