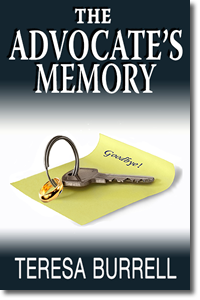 Attorney Sabre Brown runs from a horrific assault and loses her memory of it with every step. When a dead man turns up in the same area, Sabre blames herself. Did she witness the murder? Or worse–did she kill him?

Before Sabre and her private investigator, JP, can solve that mystery, a minor client, Angela, disappears near the murder scene. Sabre must find her. But as Sabre’s memory slowly returns, she realizes the killer may be coming for her next. Can she and JP find Angela in time to save them both?

Please leave a note in the “Autograph Instruction” box above with instructions on who you want the book or books signed to. If there are no instructions, the book will just be signed and dated, not personalized. If you have any questions, please email me at teresa@teresaburrell.com.

Sabre sprinted as fast as she could. Her legs felt weak, and her bare feet hurt with every step, but she had to keep moving. The chilly night made her shiver. Wet from the blood covering her body, the air cut right through her. Terror filled her and made her run faster. Would she make it? She passed the 7-Eleven and darted across the street. Cars honked and screeched as she crossed in front of them. She passed El Portal Mexican Restaurant at the entrance to the shopping center parking lot and coached herself to keep going across the parking lot to Kohl’s. Exhausted, she realized she couldn’t maintain the pace much longer. Her body hit the side of the building as she tried to catch her breath. Sabre reached into her pocket for her phone, but it wasn’t there. All she had for protection was a high-heeled shoe in her right hand.

A man parked twenty feet away got out of his car and strode toward her. She gripped the shoe as if it was her last hope, raising a hand to hit him if he came too close. When he was halfway to her, she flung the shoe. He sidestepped the flying pump, then stopped. Sabre took off.

“No!” Sabre shrieked and ran between the rows of parked cars. A vehicle suddenly backed out and knocked her down. Stunned but not seriously injured, she jumped up and kept running. She heard voices yelling behind her, but she didn’t look back. Keep going! By the time she crossed the lot and reached Balboa, she had to slow down. Every step drew more strength than she thought she had. She stopped to catch her breath. Sabre heard a siren, then saw red lights coming her way. Two police cars pulled up beside her, and a policeman walked toward her.

“Help me,” she moaned and collapsed to the ground.

Attorney Sabre Orin Brown woke up and glanced around at the sterile room. She was in a hospital, or at least she hoped she was. Groggy and confused, she tried to sit up. The pain in her head made her scowl. And the bottom of her feet hurt. She searched her memory for events that could have landed her here, but she was at a loss. She lay back against the pillow and closed her eyes, only to open them again when she heard the door.

“Good morning, sunshine.” JP’s voice was music to her ears, and the sight of his face made her smile. He wore his usual jeans, cowboy boots, and Stetson hat and carried a cup of coffee. He was her private investigator and for the past few years, her lover. They were, for all practical purposes, living together and raising his niece and nephew. And in a few days, her twelve-year-old cousin, Dené, would be living with them as well.

“I must look dreadful,” Sabre said, and smoothed her hair back.

“You could look like Annie off the pickle boat, and you’d still be beautiful to me.” He gently kissed her forehead.

Sabre smiled at the image. “What happened to me?” she asked. “Why am I here?”

“I was just about to ask you the same thing.”

“What’s the last thing you remember?”

Sabre searched her brain. “I was headed to see a minor client in the Kearny Mesa area.” She hesitated. “But I don’t recall seeing her. I remember leaving my office and driving to Polinsky to see Dené and a new client I picked up yesterday. The child was no longer at the receiving home, and Dené had a therapy session, so I only stayed for a few minutes. After I left Polinsky, I drove in the direction of the foster home, but that’s all I remember. Everything is foggy after that. Actually, it’s blank.”

“My stomach and head, mostly.” Sabre looked at JP. “Do you know how I got here?”

“Yes. That much I know. The cops found you running down Balboa after leaving a shopping center on the corner of Balboa and Genesee. A witness said you got hit by a car pulling out of a parking space, but you bounced right back up and took off again.”

“It might explain the scrapes on your arms and legs, but from what the witnesses said, you were already covered in blood and running scared. Can you remember anything about how you got to that parking lot?”

Sabre thought for a few seconds. “I have no idea.” She looked into JP’s eyes. He seemed more worried than he was letting on. “How long have I been here?”

“Overnight. This happened yesterday. The police are investigating, but they don’t have much to go on.”

“And I’m sure they have more important things to do.”

“You have friends in the department.”

“You mean you have friends in the department.”

“Same thing. DuBois and I go way back. We were on the beat together for quite a while. He’s a good guy.”

“I thought he planned to retire,” Sabre said.

“Yeah, he keeps saying that, but he doesn’t put in his notice. He’d be lost without his job. It’s his life.” JP smiled.

Sabre knew it was forced, that he was trying to make her feel at ease. “Is my phone here?”

“No, neither is your ID. You didn’t have anything on you, no money, no cards, no driver’s license. Nothing. They wouldn’t have known who you were except that DuBois happened to be here when you arrived in the ambulance. He recognized you and called me.”

“Please thank him for me.”

“I will, but you can do that yourself. He’ll be by to see you soon.”

Sabre wrinkled her brow. “Did you say I was covered in blood?”

“Yes, your shirt was soaked. The police took it for evidence.”

“Will you pull the covers off my feet, please?”

JP did as she’d asked.

“Why are my feet bandaged? The bottoms really hurt.”

“Because you were barefoot. You were wearing that green top and flared skirt you like so much, the same clothes you wore to court yesterday.”

“Both the shirt and skirt had blood on them, but the top was the worst, and the skirt was torn. That might have happened when you fell, but we can’t be certain. We don’t know when you took off your shoes. Most likely, you shed them so you could move faster. A witness said you were carrying one pump in the parking lot, then got spooked and threw it at him. The cops found that one, but they’re still looking for the other one—and your car.”

“This series never fails to excite me!”

“It is hard to believe that each book can get better, but this was not only your best book, it was one of the best of any books I have read.“–Tony H.

***
“Another great read!”–Sheila
***
“It was so good that I couldn’t stop reading.“–Vickie
***
“Loved this book from the very beginning to the last word.“–Donna R.
***
“Another great book, a lot different than your other ones but still kept me on the edge of my seat.”–Meli