Question: Who is Brad Rutter?

I had a wonderful opportunity last week to attend a Jeopardy tournament at Cubberley Middle School in Long Beach. The tournament was promoted by Jim Birge, an educator, a 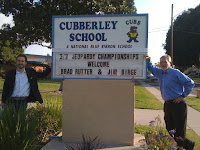 ctor, drama professor, and long time friend of mine. This man has done an incredible job of preparing questions from the school curriculum for these students. He spends long hours in preparation, then he administers a test to all students interested in participating. The top eighteen in each class, sixth, seventh, and eighth, were invited to play some elimination rounds culminating in three students from each grade level who would then play the tournament round. The qualifying process takes about a week. That does not include the many hours Jim spends creating questions.

t up is very authentic. The students stand behind a podium and read the answers from the big screen. They push the buzzer if they know the question. And the scores appear on a screen in front of the podium. I felt like I was at a real Jeopardy game except instead of Alex Trubeck, we had Jim Birge. And as an even greater treat for everyone, Jim managed to convince Brad Rutter, Jeopardy’s all time biggest money winner, to host the final tournament game.

The students were so into the game, and what an absolutely wonderful learning experience for these kids. I was truly impressed with what this event had to offer the students. In my opinion it is something every school should include in their schedules. If you have an interest in having this experience at your school click here for more information about the program. The children won’t be disappointed.