Archive for the Karen Syed Category

The “V” Word is Valentino

“V” is for Valentino…Nick Valentino that is. I had the pleasure of meeting author Nick Valentino last February at The Southern California Writer’s Conference. What a super, fun guy he is. For those of you who don’t know Nick, he writes in a genre called “Steampunk”. His novel, THOMAS RILEY, was just released. Nick is not only a fabulous writer, he is also a very helpful guy. Look how he just happened along when I was on the “V” word and saved me from having to write about victuals or voluptuous or some other inane word starting with the letter “v.” Thanks, Valentino. So, Nick, please use your vision and vocabulary to take us on a virtuous voyage through Steampunk-ville.
Thank you Tee! It’s quite an honor to get one of the twenty six letters. On that note, I want to stress how amazing these writer’s cons can be. The number one thing is you have the chance to learn so much from writers, agents, publishers and other authors. This is invaluable information that you really can’t learn from a book on writing, editing or obtaining an agent. It’s worth every penny to attend a writer’s conference.

The second amazing thing about these conferences is that you get to meet like minded people. Sure, no one was writing a Steampunk book, but no one discriminates on what you write. In fact every one of these I’ve been to, everyone has been quite amazing. The Southern California Writers Conference was where I met your favorite blog hostess Ms. Burrell. It’s also where I met my publisher Karen Syed. I had the first ten pages of my manuscript of Thomas Riley critiqued by Karen because her bio looked interesting. That’s all. One little bio changed my life in the click of a mouse. I’m being honest here. Her bio said something about doing something with the publisher TOR and I said, “Hey that looks interesting.” And I picked her and her alone to critique a relatively unknown genre. After our first meeting, we realized that we had a lot of things in common and from there the rest is history.

Karen introduced me to your hostess with the mostest and here I am guest blogging on her blog today. It’s absolutely amazing how things work out. So while this isn’t all about Steampunk, it is about writing, meeting great people and taking the initiative to achieve your goals. My goal, however remote it may have seemed was to get my manuscript published and I did it. Of course the real credit goes to those that believe in you.

My novel, Thomas Riley was conceived in September of 2008. I finished it in January of 2009 and was basically offered a publication in February of 2009. It’s now November and that book is in my hands. I’ll tell you… I’m humbled to be a part of the Echelon Press family. 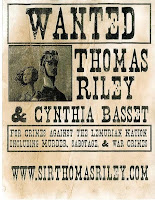 If you would like to see what my dream of Thomas Riley is all about here’s a short blurb about it.
For more than twenty years West Canvia and Lemuria have been at war. From the safety of his laboratory, weapons designer Thomas Riley has cleverly and proudly empowered the West Canvian forces. But when a risky alchemy experiment goes horribly wrong, Thomas and his wily assistant Cynthia Bassett are thrust onto the front lines of battle and forced into shaky alliances with murderous sky pirates in a deadly race to kidnap the only man who can undo the damage: the mad genius behind Lemuria’s cunning armaments.

If you enjoyed that, please feel free to visit:
http://sirthomasriley.com/

You can purchase signed copies directly through me at:
http://thomasriley.bigcartel.com/
or
http://www.echelonpress.com/